The new Fiona J. Davis novel “The Masterpiece” takes place in Grand Central Terminal during two different eras — the 1920s and the 1970s.

The new Fiona J. Davis novel “The Masterpiece” takes place in Grand Central Terminal during two different eras — the 1920s and the 1970s.

The sense of place is always very strong in the novels of Fiona Davis.

The writer’s love of New York City comes through in nearly every sentence she has written in three widely praised books that are set in and around historic Manhattan buildings.

The first book, “The Dollhouse,” dealt with the fabled Barbizon hotel for women, and the follow-up, “The Address,” explored one of the most famous apartment buildings in the city, the Dakota, on Central Park West.

The new novel, “The Masterpiece” (Dutton), takes readers into little-known nooks and crannies of Grand Central Terminal in two parallel stories set during the 1920s and the 1970s. Just as in her previous books, Davis weaves together the adventures of women in two very different times who are trying to construct good lives for themselves. 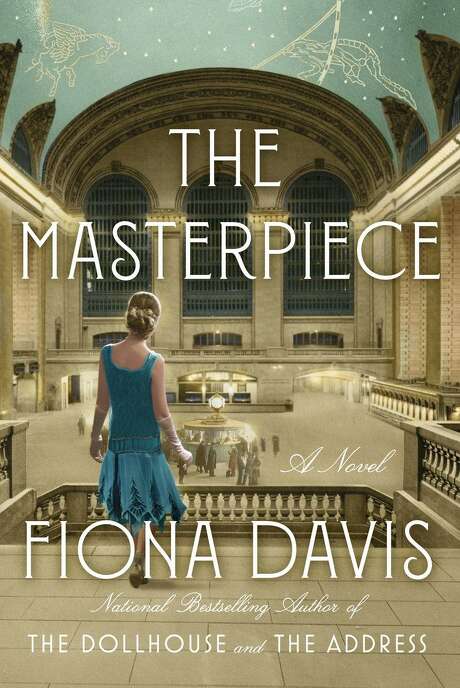 In the 1920s chapters, we follow commercial artist Clara Darden who teaches at the Grand Central School of Art (a real but long-vanished institution). In the 1970s scenes, the protagonist is Virginia Clay, a single mother still reeling from a divorce, who finds a job in the information booth in the center of the GCT concourse.

Through Virginia’s story, the author shows us how close we came to losing Grand Central in the ’70s when Penn Central railroad — which owned the building then — planned to bury the terminal under a new skyscraper (ala Penn Station). Virginia becomes part of the movement to stop the project, along with real-life preservation advocates such as Jacqueline Kennedy Onassis.

Davis hadn’t thought about setting one of her novels in Grand Central until she took a tour.

“It wasn’t on my radar at all. It’s a transportation hub. My other books took place where people lived,” she says, adding that it was a reader who suggested she look into GCT.

“The guide took us everywhere and told us so many stories that I was kind of overwhelmed,” Davis adds.

As soon as she heard that there was once an art school in the terminal, Davis knew that would be the focus of the novel.

“I was terrified to write from an artist’s point of view because I didn’t know that much about the art world, so I thank God for all of the artists’ biographies. I learned a lot — everything from the right brushes to where they all used to hang out,” she says.

Through the story of Clara in the 1920s we learn about the rigid hierarchies between various types of painting and drawing in those days. Clara is an illustrator — who gets her work published in Vogue — but is looked down on by the “serious” artists who think commercial work is demeaning. The days of Andy Warhol and his Campbell’s Soup can paintings were still 40 years in the future and magazine illustrators such as Norman Rockwell had not yet been elevated to the status of true artists.

“She was really at the bottom,” Davis says of her struggling protagonist who does eventually get into the inner circles of the Manhattan art scene.

“I discovered the fact that women would paint under male names so that they would get more visibility,” the novelist says of one of her major plot points. “I really wanted to explore that idea.”

In the 1970s chapters, Virginia finds a painting in the long-abandoned GCT art school that might be connected to a masterpiece that is about to be sold for a fortune at a New York auction house. In her struggle to find out who made the painting, the stories of Virginia and Clara come together.

In the earlier books, Davis had never zeroed in on the 1970s, so she became fascinated by studying the city during such a difficult but vibrant time. New York was on the verge of bankruptcy, but the women’s liberation movement was changing the lives of ordinary people like Virginia who we see struggling to make it on her own.

“It was a time when women were starting to step up to the plate,” the writer observes.

Davis has been in love with New York City ever since she moved there after college in the 1980s. Like most of us, she has had to adjust to the way the metropolis changes from year to year, taking away beloved old hang-outs, but adding exciting new places like Governor’s Island to explore.

“As I walk around the city, I see a ghost city,” the writer says of the changes she has lived through. She appreciates the cleaner, safer city of 2018 but misses some of the creative grit of 30 years ago.

“I don’t want us to lose the fabric of the place and I worry that it might turn into a soulless glass city,” she says, adding that every new generation probably has the same fears and that change is built into New York’s DNA.

“If it stayed the way it was in the 1600s we would all be in big trouble,” Davis adds, with a laugh.

“What really worries me is what will happen to the artists who can no longer afford the rent?,” the author says of the way gentrification has been pushing out some of the most creative people in the city — characters who add immeasurable color and excitement.

“When I moved here, I lived in the East Village in really crappy apartments, but I had a great time,” she recalls. “Rents are becoming unaffordable and the artists will start going to other places, like Pittsburgh. There has always been room in the city for artists and I would hate to see that change.”

Davis will talk about the novel 7 p.m. Wednesday, Sept. 26 at R.J. Julia Booksellers in Madison.