Jeff Bezos, founder of Amazon and space company Blue Origin , sent an open letter to Bill Nelson, the NASA administrator. In this it offers to cover billions of dollars so that they can reach the budget in the short term.

In April, NASA selected Elon Musk's SpaceX to build the next moon landing craft, Artemis. This contract was stopped because BlueOrigin and Dynetics lodged protests against it. "His decision eliminates competitive opportunities, significantly reduces the supply base and not only delays, but jeopardizes the return of the United States to the Moon. For this reason, we have filed a protest with the GAO," the company said. Bezos.

That caused SpaceX not to receive the first part of the contract, about 2.9 billion dollars, nor that it could make initial plans with NASA.

In the letter, Bezos asks back that his company be allowed to build Artemis's ship in a safe and sustainable manner. He also explains why he thinks it was a mistake to invest all the money in one company, saying that it eliminates healthy competition in the race to space. 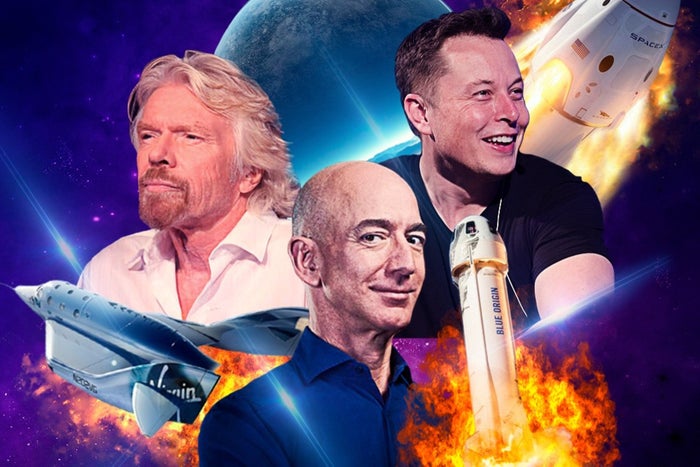 Several billionaires including Branson, Bezos and Musk are investing a lot of time and resources in space / Image: High Level .

Artemis is a project that aims to take a man and a woman to the Moon and begin to create a constant presence on the moon. This will allow trips to Mars.

Several billionaires including Branson, Bezos and Musk are investing a lot of time and resources in space. All three believe that it is the best solution to the problems humanity will face and are looking for answers beyond Earth.

But NASA and these companies are not the only ones interested. Travel to space will open up new economic opportunities for many sectors such as energy, mining, transportation, construction, and hospitality. Several of the organizations that are investing in space exploration are also looking for ways in which the moon and other planets can be exploited.

Although those scenarios are speculative, Forbes writes that one thing is certain is that the development of the technology necessary to travel to space drives the economies of certain countries. So space travel shouldn't just be of concern to billionaires like Bezos as their actions have an impact on all of us.

Real Estate Guide
Your guide to finding a house or apartment in Connecticut
Our easy-to-use guide will help you navigate some of the most popular housing markets in CT.
Most Popular

Real Estate Guide
Your guide to finding a house or apartment in Connecticut
Our easy-to-use guide will help you navigate some of the most popular housing markets in CT.
Most Popular